Rick Lewis A.R.A. is a unique talent who lives in Ireland. Born in Co. Down, Rick has always been proud of his Irish roots and in 1992 fulfilled a lifelong dream to come home and establish himself amongst the elite of Irish Artists. Initially he shone as a professional soccer player – playing for Birmingham City and Oxford United – but as fate would have it, an injury ended his sporting career and sent him instead into the world of art.

In 1961, Rick joined Royal Worcester and met Harry Davis, universally recognised as the world’s leading ceramic artist of the 20th century, he discovered Rick’s true talents. Over a period of four years, Harry took him under his wing and Rick became the only artist with whom Harry was prepared to share his talents and artistic secrets in his twilight years. Thus evolved an artist in the classical mould; gifted in painting in oils, watercolours and more uniquely in porcelain canvasses. Working with Royal Worcester brought out yet another skill, in that Rick became renowned for his sculpture and design in porcelain and bronze. Rick departed Royal Worcester to set up his on ceramic business Hereford Fine China in Ledbury, England.  The company soon got the reputation as the producer of some of the finest hand-crafted figurines in the world.  Rick moved the Company to New Zealand in 1981 where the emphasis was on themes reflecting the Australasian and Pacific Basin regions.

His most notable work for the people of New Zealand is his Kiwi which resides permanently in the “Beehive”; the centre of Government in Wellington. Now known as “Proud Kiwi”, an image of this sculpture adorns gold coins produced by the New Zealand Mint. He was later presented with the M.B.E. and A.R.A. for his contribution to fine art and design in New Zealand.

Rick is proud to have many people around the world collecting his works. Among the more notable collectors of his art is Queen Elizabeth II. In 1990, Queen Elizabeth II wrote to Rick to personally acknowledge her admiration of his work. She holds eight pieces of his work, which she prizes in her private collection at Buckingham Palace. The Queen Mother also commissioned Rick to sculpt her grandson, Charles, Prince of Wales and heir to the throne, portraying his inauguration as Master of the Royal Order of the Bath. 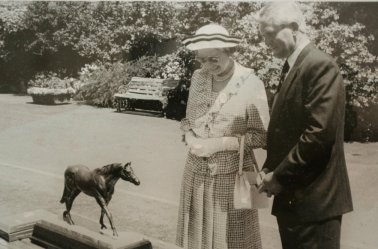 Since Rick’s return to Ireland, he has presented paintings to Presidents Mary Robinson and Mary McAlleese. The former Taoiseach, Albert Reynolds, also received a presentation of an Arkle Sculpture by Rick.  Over the years Rick has painted and sculpted many works for Knock Shrine including the new processional statue of “Our Lady” and completed a Mosaic for The Church of Reconciliation.  Rick has completed many works for the people of Mayo including a bronze statue of John King in Ballinrobe. Rick also spent 10 years as an artistic consultant with Royal Tara. 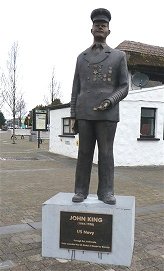 Amongst his myriad of achievements, one stands out as unique. In 1971, the Nixon administration commissioned Rick to sculpt three sets of life size “Peace Swans”. President Richard Nixon presented one pair, as a gift of the American people to Chairman Mao, the Chinese Premier. The second pair was presented to Pope Paul and are on display in the Vatican Museum while the third pair are on permanent display in the Metropolitan Museum in New York. During his esteemed career, in New Zealand, Rick sculpted a kingfisher for Lady Diana and Prince Charles which was presented to them during their state visit to the country in 1983. Rick was commissioned to create several other works of art as state gifts for many distinguished world leaders such as President George Bush, President Hillary and the King of Malaysia. He was also called upon to commemorate in bronze the achievements of Mark Todd, New Zealand’s double Olympic gold medallist at the three-day event. 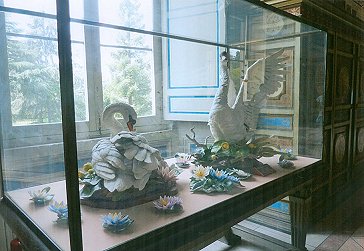 Hereford Fine China International Ltd established a far-reaching reputation as the producer of some of the finest hand-crafted figurines in the world.  Founded in England by Rick Lewis, Hereford Fine China then relocated to Hamilton, New Zealand, where the emphasis was on themes reflecting the Australasian and Pacific Basin regions.  The Company’s stature was reinforced in 1981 when a hand-crafted Hereford Fine China Tui resting on a Kowhai branch was selected as the State presentation to Queen Elizabeth on the occasion of her visit to New Zealand.  It was the third Hereford figurine to be presented to the Queen and the first to be created wholly in New Zealand.

All Hereford Fine China pieces are distinguished by attention to detail evident in design, casting, etching, glazing and painting.  They were entirely hand-crafted and meet such exacting standards that often only a portion of those created found their way out of the studio and into the hands of the collector.  The care and emphasis on quality helped make them prized and sought after possessions.